Two Films On the Edge

A member of a fanatical group tries to convince a man to radically alter his life.

The first in a pair of "chamber films" (productions designed with deliberately limited locations and cast size), BELIEF is an experiment in tension and psychological manipulation.  Shot largely in a single location using extended takes and multiple cameras, it features stunning performances by Chopper Bernet and Chris Pflueger.

Like other C AND L films, SEX AND IMAGINING was controversial from the first public reading of the script.  Does the story concern a perverse relationship or a deeply loving one? Is the relationship ever resolved or is it an unending mind game?  The script was intended as both a play and a screenplay and has been performed on stage in NYC, LA and SF.  As a film, it was intended as an experiment, an effort to create a "chamber film" that embodies the Chinese box labyrinth of the story.  The internet success of this small experimental film was a surprise and also controversial because some viewers mistake it for pornography, and others struggle with whether it is a play or a film.

BELIEF actually preceded S AND I but represents a similar experiment and a similar story structure.  This feature film was shot in three days.  Both films were shot using multiple cameras and extremely long takes. 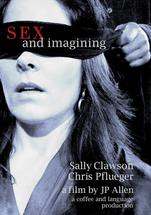 Stream S AND I in the US, UK and Worldwide

Listen to Audio Essay about SEX AND IMAGINING here