GAMBLING has had multiple lives.  It was originally a stage monologue developed in San Francisco and first professionally produced by Pacific Theatre in Vancouver, British Columbia.  Soon after, it was produced in Los Angeles at The Victory Theater.  Two years later, GAMBLING, the novel, was completed, and three years after that, the screenplay of GAMBLING was finished and taken into production.  Despite the different versions, the film is largely based on the original stage monologue (included in the final two sections of the novel).  It first screened at the Telluride IndieFest.

In 2010, six years after the film was released, a new novel called THE FILMMAKER was completed and is based on an incident relating to the production of GAMBLING - "a director is drawn into the search for a missing woman whose disappearance mirrors exact details from his recent film".  The story of GAMBLING is revisited in a strange, new way.

DVD and Instant View available at

Listen to podcasts from GAMBLING, The Novel, here

A man goes on a desperate journey through the Las Vegas night in search of a woman who has disappeared. At the same time, he prepares to make an extraordinary wager that he hopes will alter his life. GAMBLING is a dark, sensuous story of risk, love, and faith.

"A marvelous story ... told with passion and focus." 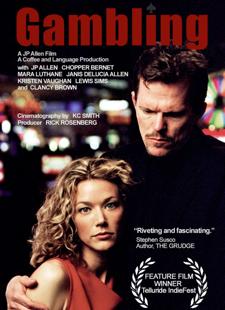