Photos in PDF but can be used as high-res jpegs

Available STREAMING and on DVD NOW

"Completely outside the Hollywood system ..."
-- Hoodline, article by David-Elijah Nahmod

What part of your life would you rewrite for love?

Yet another controversial film, reVISIONS evokes extreme reactions.  Some viewers are drawn to the love story, others are drawn to the fantastic journey through the creative process — some feel these elements are never brought together, others feel they are unified, and some even feel that the question of unity is contradicted by the story itself.  A central character,  "Blah Blah Lady," shouts "a real screenplay would have chaos!"

Originally titled LETTERS FROM CAFE TOSCA, the first version of the script was written, while drinking martinis, in that dimly lit  San Francisco bar.  However, as the film became more visual and evocative, and less drunken-literary, the title was changed to reVISIONS.  The ensemble cast features several returning C AND L actors and introduces new ones, led by Bekka Fink, Joseph Estlack, Michelle Drexler, Mikael James, and Ashley Rain Turner as the infamous "Blah Blah Lady." 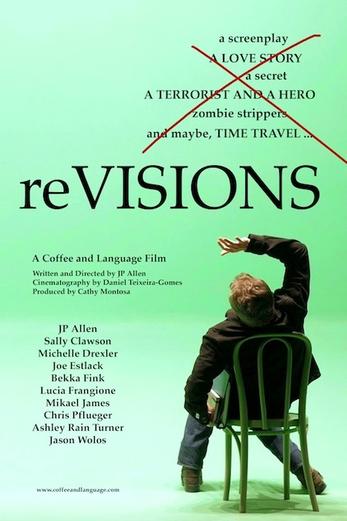 reVISIONS is a kaleidoscopic comic romance about a writer trying to win back the love of his life.  Screenwriters watch out — the film rips apart standard screenplay formulas.  In this surprising and satirical film, a writer meets an actress and wins her heart with love letters.  Later, their relationship begins to fail and he decides to give her a special gift, a screenplay based on those letters.  But his creative process also falls apart, and Pirandello-like, his unfinished screenplays, fragments and inner critic come to life to either ruin or save the relationship.